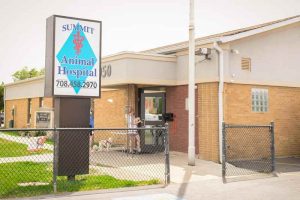 Summit Animal Hospital in Summit, IL was founded in the early 1950’s by Dr. Leon K. Leonis. Dr. Leonis and his wife began their animal practice out of their home at 6050 S. Harlem. The structure that you see today is the same as it was from the beginning. For forty years, Dr. Leonis was the sole practitioner at Summit Animal Hospital. In 1992, Dr. Leonis sold his practice to Dr. Gary R. Friederich, but continued to work part-time with Dr. Friederich. From a small town in Central Illinois, Pekin, and a graduate of the Iowa State University Veterinary School in 1970, Dr. Friederich appreciated the type of atmosphere Dr. Leonis created at the Summit location. Spending the majority of his childhood on his grandparents’ farm, he understood the role of a veterinarian in a neighborhood, where family, community, and service is important.

After Dr. Leonis’ death, Dr. Friederich continued practicing at Summit Animal Hospital, building the practice into the phenomenally progressive hospital it is today, but kept the neighborhood family-owned atmosphere. Today, Summit Animal Hospital is owned by Dr. Tracee Friederich, Dr. Friederich’s daughter. Dr. Tracee, a 2007 graduate of St. George’s University Veterinary School in Grenada, West Indies, has worked alongside of her father since 1992 prior to her entrance into veterinary school. Summit Animal Hospital continues to grow. This full service veterinary hospital still cares for the Summit community, but has expanded service to Chicago, the suburbs, and the Midwest. Treatment of dogs, cats, horses, farm animals, and exotics are patients at this progressive clinic.